I am writing to introduce my new email newsletter, "Rail Mail," which I would like to use to keep in touch with you about what’s happening at BART and in our community.

I want to give you the ability to make an impact on the decisions made by the BART Board and the opportunity to shape how BART moves forward.

So, here we go. I hope you enjoy our first installment. And please feel free to write back ([email protected]) with any comments, questions, or concerns. 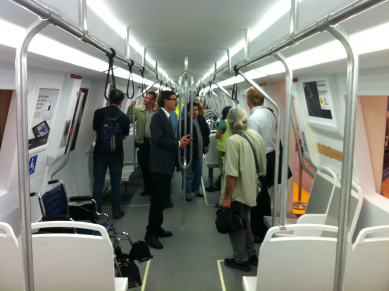 Robert Raburn greeting visitors in a wooden mock-up of the 2017 model BART car interior at MacArthur Station in August.

With my strong support, the Board is focused on reinvesting in our 41-year-old system to provide better service and grow the local economy. The primary investment is our commitment to purchase 410 new cars, to help augment and eventually replace our existing 669 cars. The first 410 new cars are expected to be delivered between 2017 and 2020, and I hope to seek even greater improvements by expanding the order, to acquire 775 or more cars.

Commute-hour passengers are reminded daily when they board crowded cars on short trains that BART needs more cars. But BART simply doesn’t have the equipment to provide 10 cars on all the peak-hour trains. We need longer trains! These new cars will go a long way to give BART the capacity to meet the demands from increasing ridership. It’s simple: more cars equals more seats. My goal is to grow the fleet to offer maximum length trains to serve our record-setting number of passengers.

Tired of waiting for the next train? We also need new cars to offer more frequent service. Presently, trains come every 15 to 20 minutes, and it’s our goal to reduce the time that passengers wait.

New cars will also improve BART’s reliability and safety. BART has the oldest fleet in the country—the average car is over 31 years-old! Following the recent Bay Bridge closure when BART ran trains around the clock, we saw service deteriorate as over a dozen aging cars had to head to the shops for maintenance. Our existing fleet has to be guarded from being overworked. Reliable new equipment will help us maintain BART’s 95% on-time performance.

The new fleet will also be more energy efficient, offer modern map displays and next-station information, and even have three doors per side to make boarding and exiting easier. This isn’t your mother’s BART!

Before the assembly line begins next year in Plattsburg, NY, I will continue to engage the public to help BART make design decisions. We collected over 2000 survey forms from about 5000 citizens who toured the wooden mock-up at MacArthur Station this summer. We also heard suggestions for on-board bike racks and accommodations for persons with disabilities during special tours with BART’s volunteer advisory committees.

Next up, in early 2014 I will invite you to preview a car prototype to review and comment on detailed design choices like seat materials and décor. Making BART better involves you!

Throughout the recent contract negotiations, I have worked to keep the peace, respect BART’s workers, and offer a fair contract that balances BART’s reinvestment needs and guards the public’s pocketbooks. Of course I was disappointed by the 4-1/2 day worker strike in early July.

Going forward, I hope we can continue to treat our workers with respect, make BART pensions and medical costs sustainable, and reform antiquated rules that have allowed abuses within the overtime system. I hope both sides can continue to negotiate in good faith. 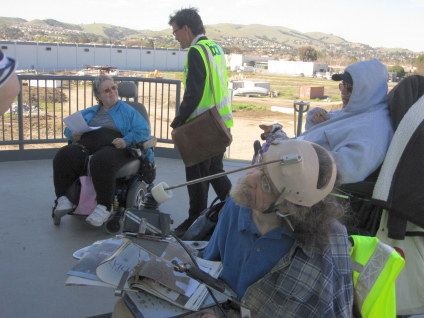 Members of BART’s Accessibility Task Force reviewing the West Dublin Station before it was opened to the public.

I have worked hard to elevate the stature of BART’s volunteer advisory committees. All eight committees receive the attention of senior staff, meeting agendas are publically posted, and volunteers receive a BART travel reimbursement to attend meetings. You are encouraged to join me in attending meetings or apply to serve and assist in guiding BART staff and the Board. A brief review of the eight committees follows:

Accessibility Task Force members review projects and policies to guide BART in meeting the needs of passengers with disabilities. In 2012 their highest priority project resulted in marking every stair tread throughout 44 stations with high-visibility yellow materials.

Citizen Review Board (CRB) was one of several reforms following the Oscar Grant shooting. The CRB was formed to review BART Police Department policies; review complaints about the police, and recommend corrective action. Several Board-appointed members recently participated in a pre-screening of the movie, Fruitvale Station.

Title VI/Environmental Justice Advisory Committee was formed in 2013 to ensure BART projects and services avoid discriminatory impacts on low income and minority populations, in compliance with Title VI of the Federal Civil Rights Act and our own policy adopted in July 2013. Public participation is a fundamental principal of environmental justice. The committee recently reviewed how BART communicated to passengers with limited English proficiency during an emergency evacuation at Fruitvale.

Transit Security Advisory Committee was formed as part of BART’s efforts to better protect passengers and employees from disruptive and unruly individuals. In 2011, passage of AB 716 gave BART the authority to exclude disruptive passengers from the trains. The TSAC is charged with reviewing appeals to exclusion orders.

Soon after the BART Board brought in Grace Crunican as BART’s new General Manager in September 2011, I acted to buttress her personal calls for transparency and accountability by calling for BART to amend the District’s Code of Conduct Policies. On August 8, 2013 the Board approved the amendments to guide the ethical behavior of BART Employees, Contractors, Advisory Committee members, and Board members. Also, we adopted a Whistleblower Policy that encourages reporting of misconduct “that jeopardizes the safety of passengers or District employees.” 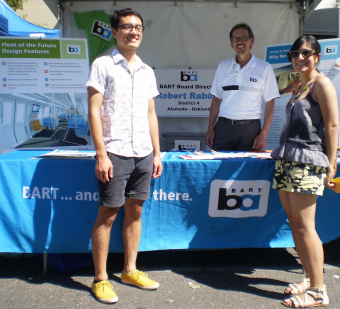 My summer weekends have again been filled with community events. I rely on being able to reach out to the communities in BART District 4 and listen to your ideas and suggestions. In cases where street events are not directly served by BART, I pay for my own booth space (Oakland’s Laurel Street Fair and two days at Alameda’s Neptune Festival are two recent examples). I also joined BART staff in greeting many BART passengers at Oakland’s Chinatown Street Fest and Oakland Pride. 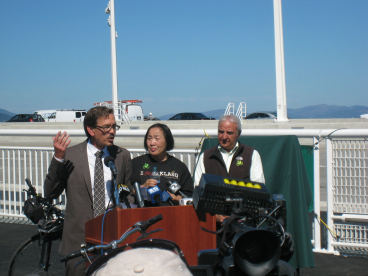 I also enjoyed participating in dedicating the Alex Zuckermann Bicycle-Pedestrian Path on the Bay Bridge on September 3.

Next up: Oaktoberfest in the Dimond on October 5, and Dia de los Muertos at Fruitvale BART.