In this month's edition of Rail Mail, I am excited to announce a new BART fleet prototype, transportation trends for the Bay Area, and a recap of my trip to Washington DC for the American Public Transportation Association’s legislative conference.

I hope you enjoy this newsletter, and as always I welcome your feedback and suggestions.

The public is invited to review the impressive prototype train car from 11am to 7pm on April 16, at BART’s Blue Sky Festival, Justin Herman Plaza. The prototype is built using real car materials, but only includes the cab and the front two of the three doors that the new cars will feature.  Many of your suggestions from visiting earlier seat labs and the wooden car mock-up last year have been incorporated into the design and layout of the new car.

BART does not have enough cars and most of the aging fleet began service in 1972. The BART Board and General Manager, Grace Crunican, are focused like a laser on finding funds to boost the car order from 775 to 1000. At the May 28-29 BART Board Retreat we agreed that the 1000 cars are needed to provide longer and more frequent trains to serve our growing ridership.

Please also mark your calendar to join me during the new car review at Fruitvale Station from 2-7pm on May 7. We want to survey your preferences, one more time, before the assembly line begins. For more info, all display dates, and an impressive video visit: http://www.bart.gov/news/articles/2014/news20140402

Breaking News in Sacramento: Senate Pro Tem Darryl Steinberg proposed on April 14, 2014 to permanently direct the largest part of future Cap and Trade funding toward affordable housing and sustainable communities projects. For the past two years my lobbying mantra in Sacramento has sought to replace redevelopment funds to “build affordable housing at transit oriented development.” Steinberg's proposal holds promise to significantly reduce GHG emissions over the long-term by activating our core urban areas with new development. He also proposes the next largest amount will be dedicated to fund transit. Indeed, a new urban future is fast approaching! 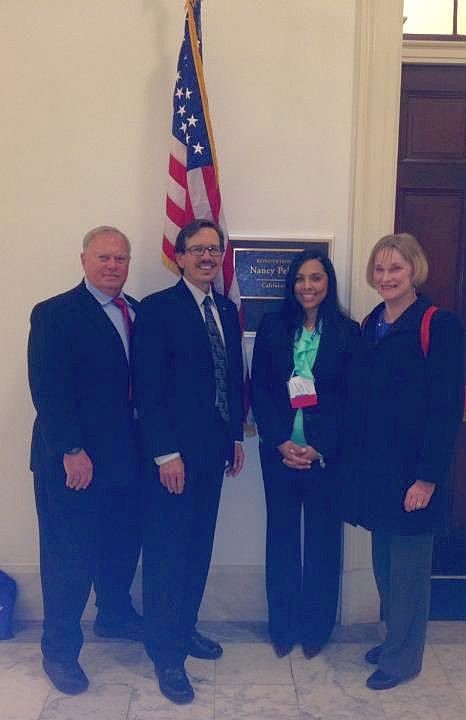 As chair of the Planning, Public Affairs, Access and Legislation Committee, I was honored to lead BART’s discussions with legislators in Washington DC during the American Public Transportation Association’s legislative conference, March 2-5.

Before embarking to Capitol Hill, hundreds of transit leaders heard a keynote address from the Department of Transportation Secretary, Anthony Foxx, who promoted a 4-year, $302 billion transportation proposal included in President Obama’s Fiscal Year 2015 budget. Given that the US population is projected to grow by 100 million by 2050, Secretary Foxx stressed the need for sound investments in transit.

It is no surprise to our riders that the Bay Area depends on BART. We carry as many transbay passengers as travel on the Bay Bridge. Discounting future population growth, BART must methodically reinvest to keep the 42-year old BART system in a reliable “State of Good Repair.” We briefed our California Representatives on BART’s Big 3 priorities needed to reliably serve our growing passenger volume: 1) BART’s fleet of the future will allow longer trains; 2) a new train control system promises to increase the BART’s transbay passenger capacity by 25% by allowing more frequent trains; and 3) a

Hayward Maintenance Complex to store and maintain the larger fleet.

Most everyone agrees on the need for transportation, but not how to pay for it. The President’s budget proposal faces an uphill battle from the House of Representatives.  In addition, the Highway Trust Fund, paid for by a gas tax, is nearing bankruptcy. The Federal gas tax of 18.4 cents per gallon has not been raised since 1993 and revenues are declining. Congressman Earl Blumenauer (D-OR) received a standing ovation for proposing an increase in the gas tax. However, an increased gas tax is opposed by Bill Shuster (R-PA), chair of the House Transportation and Infrastructure Committee. Other ideas include tolls on Interstate Highways and oil severance fees. The clock is ticking. The existing transportation bill, MAP-21, is set to expire on October 1, 2014.

Breaking news since returning home: the US Senate is pushing a MAP-21 reauthorization and restoration of commuter tax benefits for transit riders to be equivalent to the $245/month received by those who drive and park. The BART Board opposed the cut to $125/month suffered by transit riders on Jan 1, 2014. 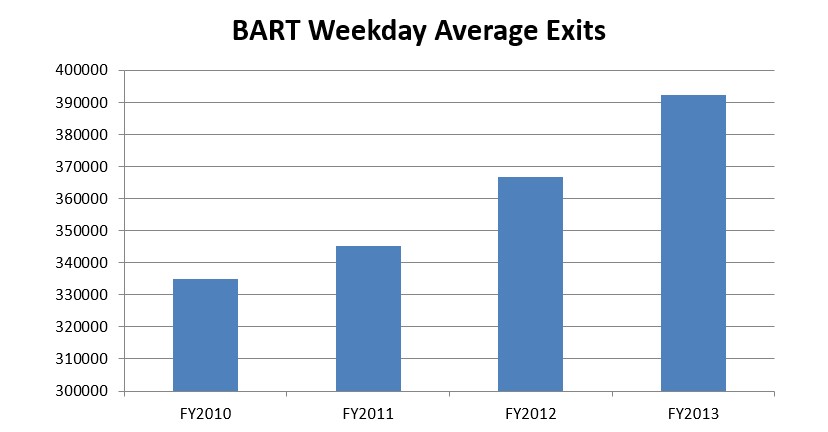 The Millennial Generation (born 1982-2003) is shaping a new urban future in the Bay Area and nationwide. According to national reports and surveys, rates of driving are on the decline, while transit, walking and bicycling are on the rise (APTA, 2014; US PIRG, 2013). In short, Millennials are multimodal and they are attracted to communities that offer transportation choices.

Americans took a record 10.7 billion trips on public transportation last year – the highest total since 1956 when the highway juggernaut was overtaking American transport. The percent of American commuters who rely on transit has not reached the Eisenhower era figure of over 12%, but it has grown to 5% of the commute mode in 2012 after decades of decline.

The Bay Area has a much higher rate of transit use than the nation. BART is the fifth largest rail transit operation in the country with a record 118 million passenger trips in fiscal year 2013 (after New York, Washington DC, Chicago, and Boston). Average weekday passenger exits on BART have steadily risen since FY2010 from 335,000 to over 392,000 in FY2013. This trend reflects both the broad demographic influence of the Millennials and the recent economic recovery.

It is interesting to note that a decade ago BART had the same number of train cars as today and that BART’s average weekday ridership was about 295,000. This inadequate number of cars is now routinely called upon to carry over 400,000 passengers per day as the following data indicate:

Thank you for reading!