In this edition of my regular newsletter, Rail Mail, I focus on what’s been happening lately at the 19th Street Oakland station, and everything we are doing at BART to make your experience there better.

The 19th Street Station is BART’s “rock star.” It leads all stations outside of the SFO extension with a 52.8% increase in ridership since 2004 (from 2,137,906 to 3,266,593 annual exits in 2013). We can thank the nearby housing developments, workplaces, restaurants, entertainment venues, and you for making 19th Street a popular origin and destination. There is constant traffic through 19th Street Station—morning, noon, and night—unlike many outlying BART stations where passenger flow slows to a trickle during the midday and evening. It is the third busiest station in the East Bay after Downtown Berkeley and 12th Street Stations. Each weekday about 11,000 passengers exit the station.

Below is my favorite ridership chart that I refer to as the “Uptown EKG.” The spikes depict the popular Art Murmur on the first Friday of each month (hope to see you there tomorrow!) when BART brings as many as 5,000 additional passengers to the galleries, food, and entertainment in the Uptown District. 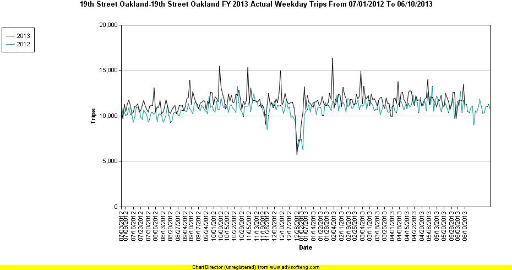 Frequent Free B shuttles run on Broadway from Jack London Square and Oakland Amtrak to Grand Avenue. On weekends the Free B operates until 1:00 AM and the route extends north of Grand Ave to 27th Street. I joined many civic leaders in pleading with the Air District in 2013 to not cut this valuable service. Also, AC Transit’s hub on Thomas Berkley Way (20th Street) features shelters equipped with Next Bus displays for many lines (your Clipper card will automatically deduct $0.25 when connecting with BART). 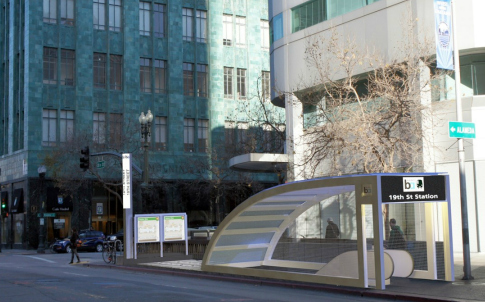 19th Street BART Station is the location of several projects I am championing that will enhance the Uptown community both day and night. The escalator canopy which is coming soon will improve access, security, and the mechanical reliability of the escalator. We all know how vulnerable the thirteen aging street escalators in downtown Oakland are to breakdowns. They get rained on and clogged with disgusting debris. A new entrance will feature train information and a street-level grill gate to keep the bottom of the stairs from being defaced, damaged, or trashed. The BART Board approved a bid proposal for slightly under $1 million for this pilot project on January 9th. Construction is expected to begin in March and I'm excited about beginning the evaluation when the cover is completed later in 2014!

Construction crews recently blocked the alley entrance to 19th Street Station, and will be there through late February 2014. When complete, this entrance from either Broadway or Telegraph will come alive with the luminous art of Dan Corson. This City of Oakland project was championed by Councilmember Rebecca Kaplan before I took office. I facilitated a collaboration to redesign the alley for greater public security and add new BART street signs. I invite you to imagine how Corson’s “Shifting Topographies” installation will cover the entire wall next to the escalator and be illuminated in shifting patterns by day and by projectors at night. 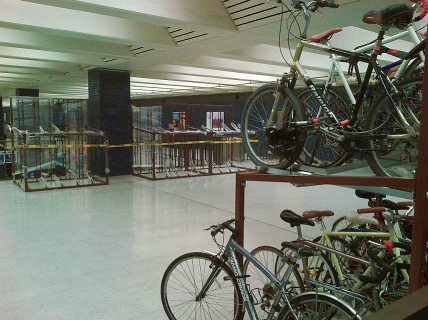 Ridership is climbing, causing the recently installed high-density racks inside the station to be filled to capacity each weekday. At the street-level, new City-installed racks and secure Bike Link electronic lockers are also routinely filled. Unfortunately, there is not enough sidewalk space for more e-Lockers and bicycles must be secured with strong U-Locks (never use a mere cable!) to avoid theft. But help is on the way! On November 19th, the BART Board approved a cooperative agreement with the City of Oakland and a lease agreement for a Bike Station—complete with an attendant!—at the street-level on Broadway.

BART staff agree that the forlorn 17th Street Station Agent booth deserves to be recommissioned in 2014 to serve the burgeoning passenger load, provide disabled passengers with elevator assistance, and reduce rampant fare evasion. BART is collaborating with the City of Oakland to initiate streetscape improvements along 20th Street. A reconfiguration could widen the inadequate sidewalks, improve pedestrian crossings, and add bike lanes from Lakeside Drive to BART. Redevelopment of the Sears store into a popular retail destination could become a reality in the coming years. And finally, I have long championed renaming 19th Street to Uptown Station. Please let me know what you think.